So two mourning doves perch on a bar:

And on a much sadder note:
I'll let this little fella speak for himself:
Posted by Carolina Linthead at 10:41 AM 7 comments: 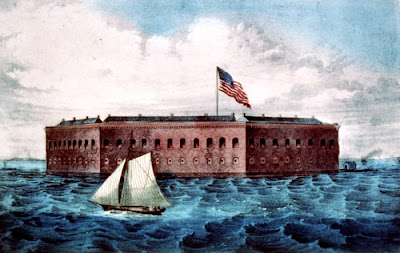 There is much talk these days, as we commemorate the 150th anniversary of the beginning of the American Civil War, about the causes of that war.  A recent poll indicates that a near majority of Americans believe this war began over an abstract principle which is most frequently labeled "States' Rights." It is well and good to claim this, if you understand what "rights" were most dear to secessionists.  It is something altogether different if you use "States' Rights" as a vehicle for trying to deny that the war began as a crisis over the fate of slavery within the Republic.  We need to move beyond this decades-old smokescreen, my friends, and the surest way to do that is to go back to the declarations issued by the seceding states.  They are stunningly clear: these states seceded from the United States because they believed slavery could no longer be protected within the Union, and they were bound and determined not to let go of their peculiar institution.  Want proof?  It is not hard to find.  Let's start with South Carolina.

From "Declaration of the Immediate Causes Which Induce and Justify the Secession of South Carolina from the Federal Union":

We affirm that these ends for which this Government was instituted have been defeated, and the Government itself has been made destructive of them by the action of the non-slaveholding States. Those States have assumed the right of deciding upon the propriety of our domestic institutions; and have denied the rights of property established in fifteen of the States and recognized by the Constitution; they have denounced as sinful the institution of slavery; they have permitted open establishment among them of societies, whose avowed object is to disturb the peace and to eloign [take away] the property of the citizens of other States. They have encouraged and assisted thousands of our slaves to leave their homes; and those who remain, have been incited by emissaries, books and pictures to servile insurrection.

For twenty-five years this agitation has been steadily increasing, until it has now secured to its aid the power of the common Government. Observing the *forms* [emphasis in the original] of the Constitution, a sectional party has found within that Article establishing the Executive Department, the means of subverting the Constitution itself. A geographical line has been drawn across the Union, and all the States north of that line have united in the election of a man to the high office of President of the United States, whose opinions and purposes are hostile to slavery. He is to be entrusted with the administration of the common Government, because he has declared that that "Government cannot endure permanently half slave, half free," and that the public mind must rest in the belief that slavery is in the course of ultimate extinction.

This sectional combination for the submersion of the Constitution, has been aided in some of the States by elevating to citizenship, persons who, by the supreme law of the land, are incapable of becoming citizens; and their votes have been used to inaugurate a new policy, hostile to the South, and destructive of its beliefs and safety.

On the 4th day of March next, this party will take possession of the Government. It has announced that the South shall be excluded from the common territory, that the judicial tribunals shall be made sectional, and that a war must be waged against slavery until it shall cease throughout the United States.

The guaranties of the Constitution will then no longer exist; the equal rights of the States will be lost. The slaveholding States will no longer have the power of self-government, or self-protection, and the Federal Government will have become their enemy.

Sectional interest and animosity will deepen the irritation, and all hope of remedy is rendered vain, by the fact that public opinion at the North has invested a great political error with the sanction of more erroneous religious belief.

We, therefore, the People of South Carolina, by our delegates in Convention assembled, appealing to the Supreme Judge of the world for the rectitude of our intentions, have solemnly declared that the Union heretofore existing between this State and the other States of North America, is dissolved, and that the State of South Carolina has resumed her position among the nations of the world, as a separate and independent State; with full power to levy war, conclude peace, contract alliances, establish commerce, and to do all other acts and things which independent States may of right do. 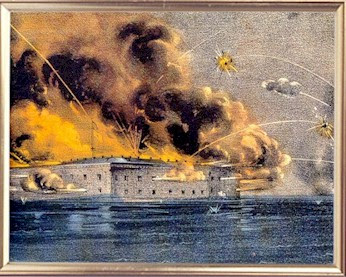 Lest you doubt the word of the delegates from South Carolina, or you think I have misconstrued their argument, consider the statement from Mississippi.

From: "A Declaration of the Immediate Causes which Induce and Justify the Secession of the State of Mississippi from the Federal Union":

In the momentous step which our State has taken of dissolving its connection with the government of which we so long formed a part, it is but just that we should declare the prominent reasons which have induced our course.

Our position is thoroughly identified with the institution of slavery-- the greatest material interest of the world. Its labor supplies the product which constitutes by far the largest and most important portions of commerce of the earth. These products are peculiar to the climate verging on the tropical regions, and by an imperious law of nature, none but the black race can bear exposure to the tropical sun. These products have become necessities of the world, and a blow at slavery is a blow at commerce and civilization. That blow has been long aimed at the institution, and was at the point of reaching its consummation. There was no choice left us but submission to the mandates of abolition, or a dissolution of the Union, whose principles had been subverted to work out our ruin.

See here for declarations of causes from Georgia, Mississippi, South Carolina, and Texas in their entirety.  I also highly recommend Charles Dew, Apostles of Disunion, for more on what secessionists said as to why they believed secession to be the best option for South Carolina and the other slaveholding states.
Posted by Carolina Linthead at 2:52 PM 4 comments:

Email ThisBlogThis!Share to TwitterShare to FacebookShare to Pinterest
Labels: History 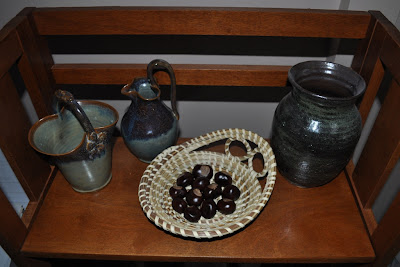 When the Lady of Willow Manor makes a request, one complies. Like her, I do not consider myself a lucky person.  I was born on Friday the 13th...go figure. I've taken some hard knocks, had some significant, occasionally heartbreaking disappointments, and am the worst stock trader of ALL TIME! I made my own luck as a grad student, worked to make myself as marketable as possible, and applied for jobs that seemed like excellent fits for me.  After several years and a couple of "close but no thanks" experiences, I got my tenure-track position. While I am fortunate to have a job, I didn't exactly "luck out" in getting it, and it is far from the best-paying or least stressful position I could have landed.  Lucky? Not so much.
I take the good with the bad, I ramble on, I have been known to speak in song lyrics, and so on occasion I think that "if it weren't for bad luck, I'd have no luck at all," with one supreme caveat: I am the luckiest man in the world to be married to The Bug!  Thus it is natural that when she and I were on a getaway weekend up at Marblehead Peninsula (of course The Bug blogged about Marblehead/Lake Erie :-) and happened upon some new-fallen buckeyes, I had to pick up an even dozen, just in case.  Should I have picked up thirteen? 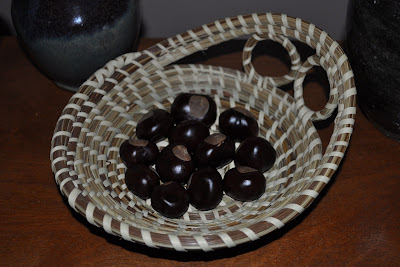 They lived in a pottery bowl for months, thoroughly drying out (they have an oily feel to them when they're fresh).  But last year, The Bug and I traveled to Charleston, SC (follow link for pictures from that week, including one of The Bug with the lady who crafted our basket!), for a conference at which I delivered a paper, and there we found a new home for our buckeyes.  I wasn't much into conferencing once my session was over, and so we spent a lot of time touring this lovely city.  On one of our rambles, we found Meeting Street where women sell their world-famous sweetgrass baskets (next to St. Michael's Church :-). 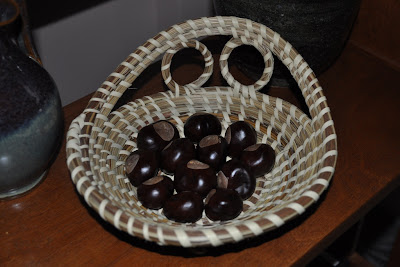 We found one within our price range and are very, very happy to have such an exquisite piece of African-American folk art in our home (There are also Native American traditions of weaving sweetgrass, one should note, but the Gullah tradition is mostly West African).  Our treasure lives on a shelf with a couple of pieces of North Carolina folk pottery: a pitcher and basket from Latham's Pottery of Sea Grove, NC (love the color scheme!), and a complimentary vase thrown from Catawba Valley red clay by our cousin JP. 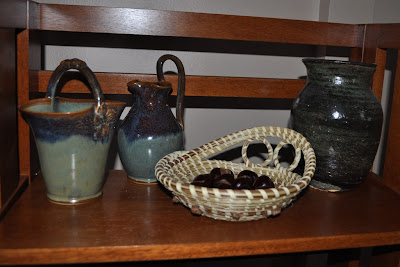 The sweetgrass basket seems like it might even be a magical vessel for our buckeyes.  We'll see. 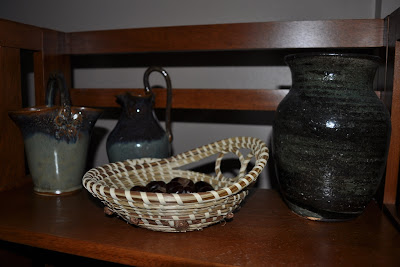 So there you have it, Tess: buckeyes in a basket! I aim to please :-)
And now, for your viewing pleasure, some more pieces of folk pottery courtesy of cousins SF and JP, otherwise known as Hog Hill Pottery (you won't regret checking out their website): 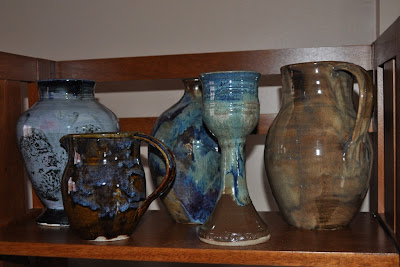 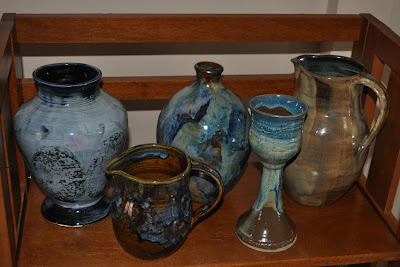 And finally I present my small but fun collection of pots thrown by the late great Burlon Craig, who helped resurrect the pottery tradition in the Catawba Valley of NC. He made exquisite face jugs but is equally well known for his utilitarian pieces with swirl glazing.  These two pieces (center and left, below) were from later in his life and thus of uneven quality. Still, I do consider myself "lucky" to have them (I paid a fair price): 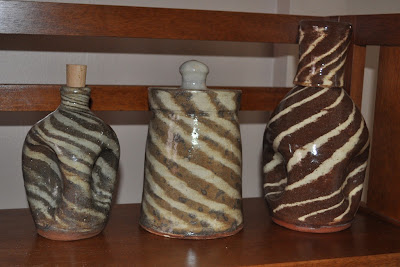 The large, darker pinch jug (right) with cap was thrown by Craig's student, the left-handed Walter Fleming, thus its swirls go in the opposite direction.  Walter is still throwing pots, including face jugs, far as I know.  I have a number of smaller pieces, mostly from Sea Grove potters, but I'll save those for another time.
Posted by Carolina Linthead at 7:37 PM 5 comments:

Say hello to my (not so) little friend!

I was leaving campus today when I saw/felt this presence peering at me from the treeline.  Funny, I don't think of myself as a small bird... 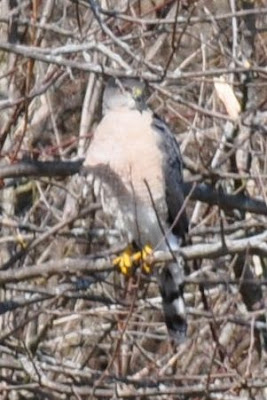 Meet the sharp-shinned hawk, and be afraid, be very afraid! 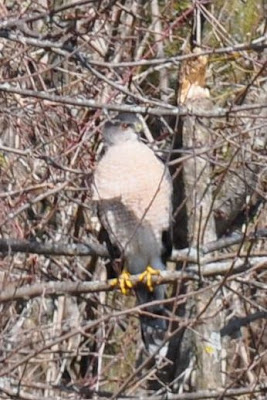 These pictures were shot at the extreme limits of my lens.  I will gladly accept donations if anyone wants me to have greater telephoto capability :-)
Meanwhile, back at the ranch, we have this visitor: 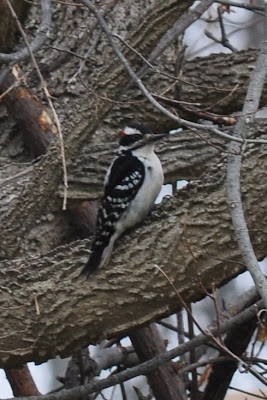 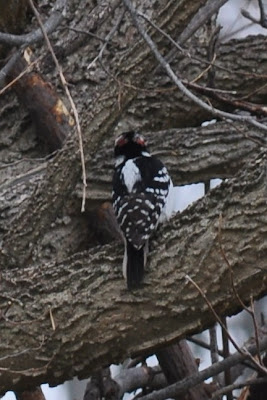 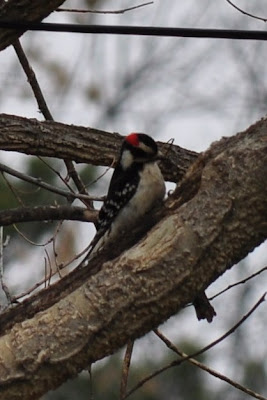 In Ohio, this is the season when the red-winged blackbirds return! 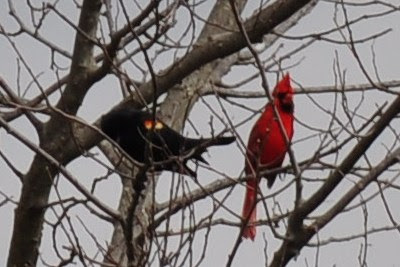 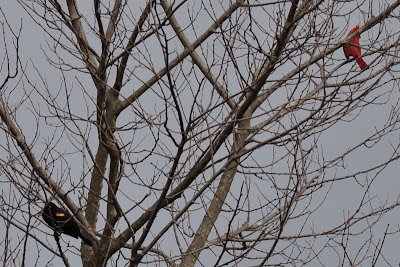 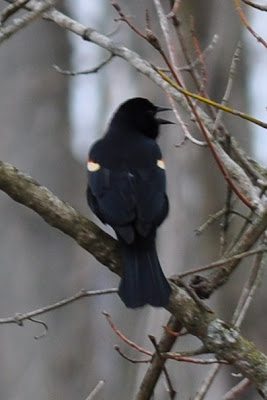 Singing for joy in the fen!
And then there is the local color: 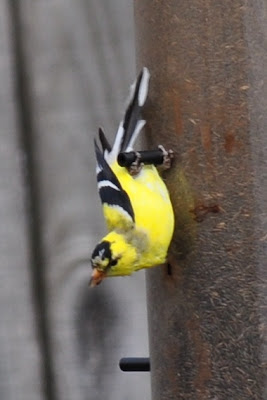 Finally, there is this lovely reminder that somewhere out there is a bird lover named Jayne. 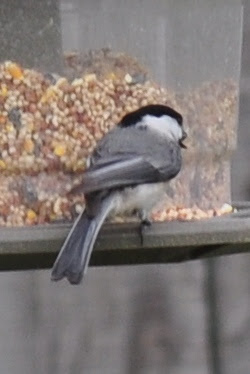 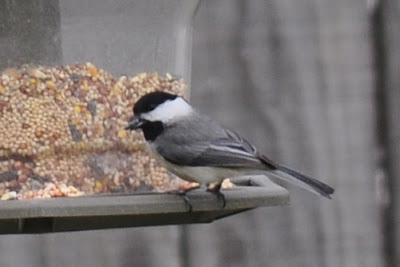 Thinking of you, my friend.
Posted by Carolina Linthead at 4:15 PM 4 comments: