Drink up, me hearties, yo ho!

'Tis the season when I get in touch with my inner pirate.  This shirt, for example, which I wore on International Talk Like a Pirate Day: 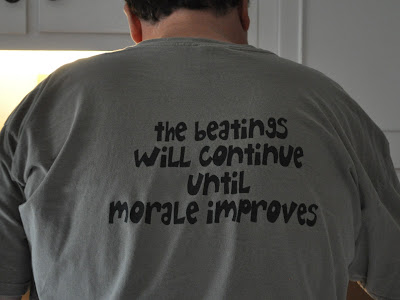 Oh, it goes much, much further.  Every year, I escort my History Club to the Ohio Renaissance Festival...in costume!  See for example: 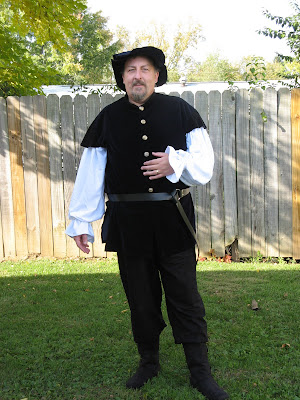 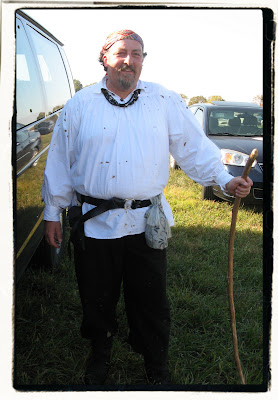 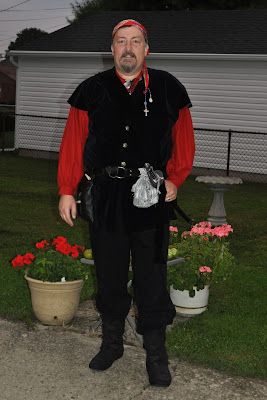 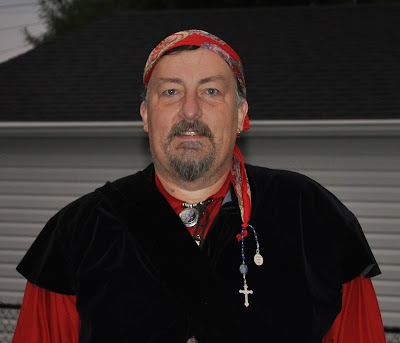 I also dress as a pirate for Halloween: 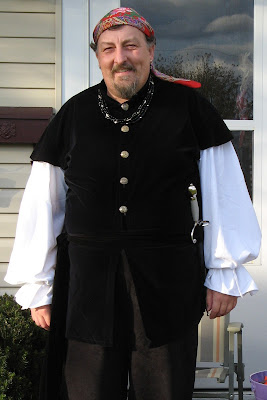 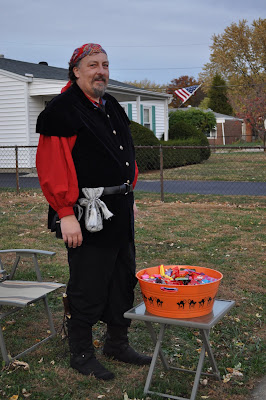 Last Halloween.
As I have gotten in touch with my pirate alter ego, I have added some representative bits of shiny (mostly stolen from my love's jewelry box...hello, pirate!): 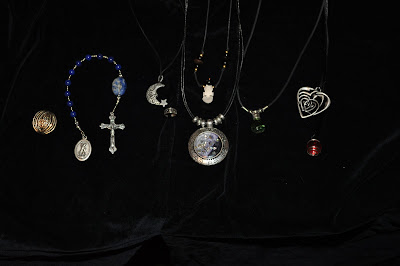 From left to right: a button off my pirate vest (which is the backdrop for this pic), my St. Michael Chaplet (a special gift to myself), crescent moon and star necklace from this year's Ren Fest, sterling moon and stars ear cuff (my first bit of pirate bling!), silver medallion choker, penguin pendant, pendant with a grain of rice bearing my love's name sealed in a bottle (very special...thanks, J!), and the pewter heart with Celtic design and glass orb pendants. from past festivals. 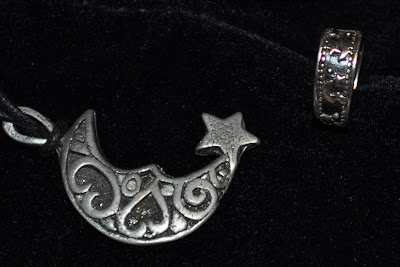 Pewter crescent moon pendant and silver moon and stars ear cuff
Of these, the bits of shiny that are ME are the two above.  The pirate me is a creature of the night, destined to walk in shadow, avoiding the full light of day and the subsequent scrutiny of prying eyes.  He did not choose this fate, but he embraces it as his doom: take what you can, give nothing back (except to them as have need).  His symbols are the moon, the great silver lady who smiles down on him, and the stars, which wantonly wink at him and help him chart his course.  He is dark, blue eyes not withstanding, but he does not dwell in total darkness, for these celestial bodies provide him with that glimmer by which he can carry on.  He is sadder than you know, has known pain unspeakable, and yet he is stronger, far stronger, than I.  His abiding dream is some day to say, "helmsman, bring me yon star!"
Posted by Carolina Linthead at 10:28 PM 7 comments:

We have a rare albino grey squirrel in our neighborhood! There are white squirrels, and then there are albinos.  These photos were taken on an overcast evening with a zoom lens, so you can't really tell, but witnesses who saw him earlier say he has pink eyes.  You can see a dark pinkish tint in the last photo.  We also think he is a male, though a young one...not sure his voice has changed, hehe.  Hope you enjoy these pics of this impossibly cute critter! 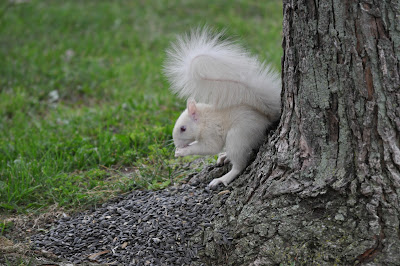 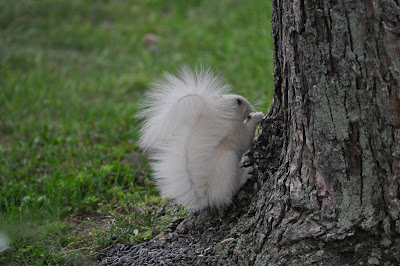 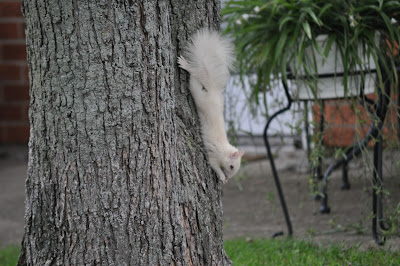 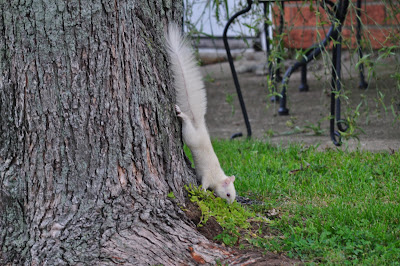 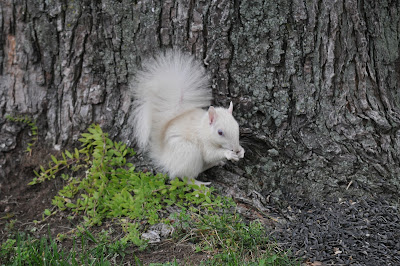 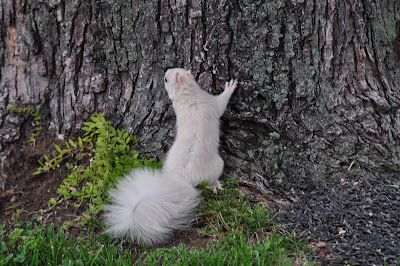 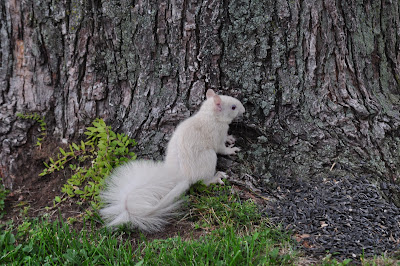 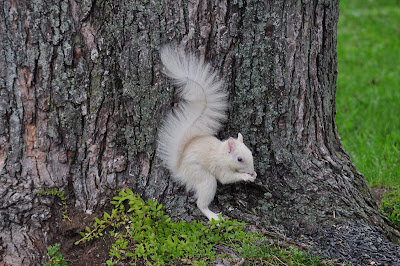 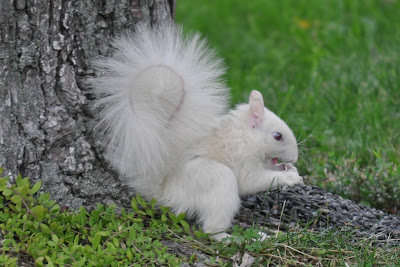 For more on white and albino squirrels in North America, click here.
Posted by Carolina Linthead at 9:01 AM 4 comments:

Email ThisBlogThis!Share to TwitterShare to FacebookShare to Pinterest
Labels: Photography, Signs and Wonders

Hummingbirds are such remarkable creatures.  They have little need of their legs, except for perching and gathering nesting material.  They can hover almost indefinitely, so long as their sugar level is high enough.  They have long tongues that extend from their long bills to lap up the nectar that fuels their engines.  They eat gnats (yay!) and such to get their protein.  And they have iridescent feathers, capable of reflecting light in a much more complex manner than feathers colored by pigmentation can accomplish.  They literally capture the sun and redirect specific colors, as in the "ruby" throat of our male east-of-the-Mississippi hummers.  Here are some pictures I took "out back" as we received visitors to our yard here in Ohio: 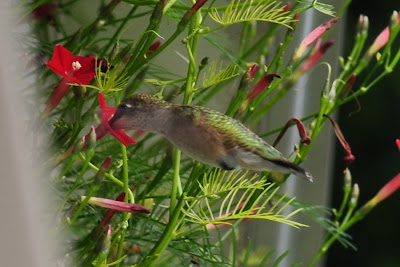 She catches the light just enough to show her color. 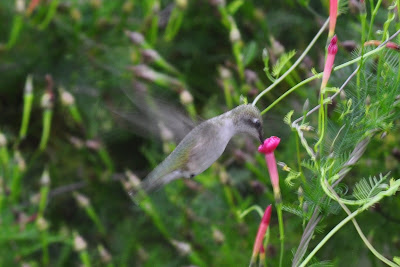 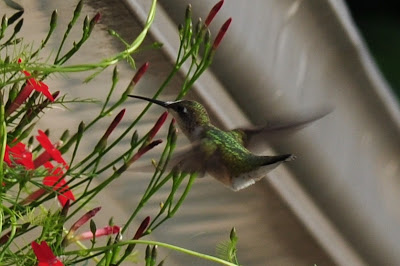 Glorious with morning sun on her back! 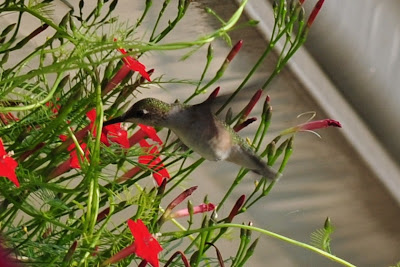 Fattening up for the long trip south. 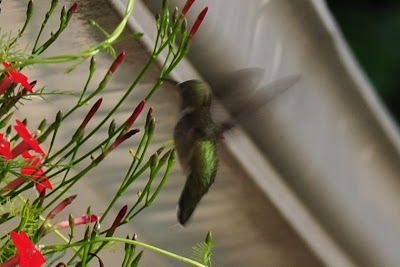 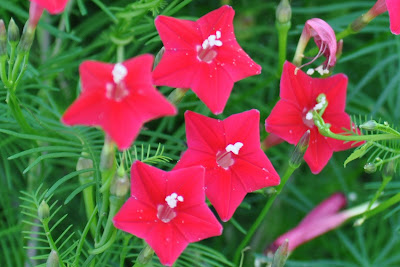 The red cypress blooms are custom designed for hummingbirds: red to attract them (insects don't see red, so less competition) and extended pollen delivery system to utilize the busy little birds for pollination! 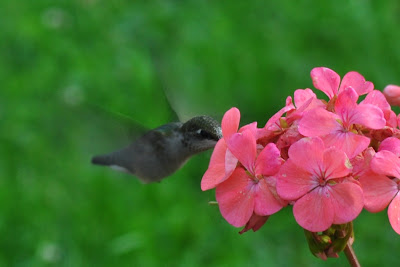 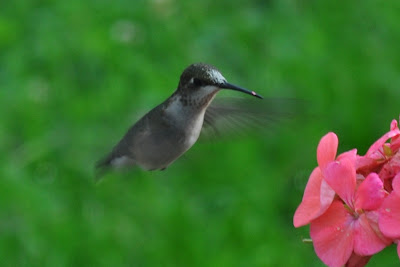 Note the bit of geranium petal on the bill, and the pollen on the forehead :-)
May light perpetual shine on the souls of all victims of violence in our world, and may we be vessels of that light, reflecting eternal, unconditional love that comes not from within, but from that source of peace that surpasses our understanding yet sustains us. 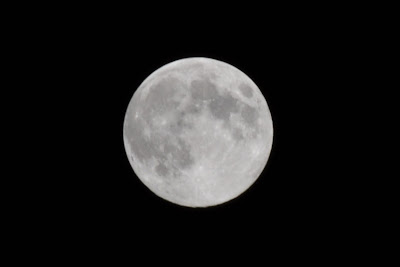